METARIE, La. – Federal Emergency Managment Agency (FEMA) trailers are an iconic marker. Not just of the disaster that befell their inhabitants, but of everything it entails. The desperation, despair, frustration, elation, hope and perhaps most endearing – the perseverance of those who refuse to give up - all accurate nuances to what is symbolized by a simple, plain, white travel trailer. Tomorrow, I will experience one night in one of these “temporary” dwellings. I am quite sure it will not sufficiently transfer the experience of daily, weekly, monthly and now approaching a full year of living in one of these boxes. 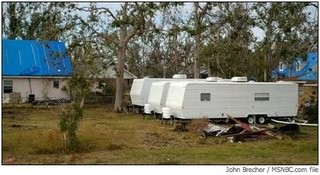 Tonight, I will endeavor to bring something different – something besides the news bites of the Lower Ninth Ward, different than the racial rhetoric and not just another story of the various levels of government falling flat on its collective face. This will be a tale of observation. Indeed, this story will reaffirm some of what was reported in the national news and now, because of Katrina’s one-year anniversary, is beginning to make its way back into the headlines once again.

The pictures do not do it justice.

The trailers are smaller and bleaker than any picture could say. Although the power has been restored, many, many of the homes are not using it; they are uninhabitable. The streets are lit, but the homes are black. There are waterlines everywhere - high water marks and the fainter lines of the receding levels. OK, not everywhere - just in 80 percent of the New Orleans area – ok, everywhere. Piles and piles of rubble are on virtually every corner, and in between – still, one-year later. Signs are blown over and left hanging – siding is blown off, and yet there is life here.

In an odd sort of way, the tales of the deserted “ghost town” are true to an extent, but to view this as a barren wasteland would be grossly inaccurate. Did the government fail the hurricane victims? Perhaps. Has the rest of the country forgotten about New Orleans? Well… yes and no, but not right now with the passing of this milestone. (I’ll get to Mississippi tomorrow – literally and figuratively. I haven’t forgotten). What struck me first and hardest was something a bit more positive. It speaks to a quality about the people in this part of the country that cannot be understated and should not be underestimated.

Now Orleans is rebuilding. With or without the government, regardless of whether or not the news cameras document it and all the while keeping the faith, this city will be back. As much destruction as there is, there is the resolve to match. Work is slowly but steadily moving along. There is traffic and I have even experienced the ironic pleasure of being stuck in it. Although many businesses are still closed up and many homes are gutted, there is progress being made. The stores are opening and there are at least some homes that have been re-inhabited. Sooner or later, the trailers will be gone.

But there is so much left to do. Disasters, natural and otherwise occur, have occurred and will continue to occur forever. In California we have had earthquakes, floods and wildfires. However, nothing in California’s entire recorded history remotely compares to the destruction that Katrina did. This one was over the top.

Pictures do not do it justice.
Posted by Michael K. Althouse at 9:36 PM

Hey Mike, thanks sharing this with us. *Sigh*
Between this and writing my tribute for one of the 9/1 victims I feel very sad.

Please keep writing about this. I have been reading different articles today about Katrina and the mess of New Orleans........it blows my mind.

A bunch of stats were listed in the National paper.........The Globe and Mail that boggles........only 18 percent of elementary schools are open......that was just one of them, but it left me absolutely floored.

Why? Why? Why hasn't progress been made on this front? Given the money and the ability........ how can all levels of government sleep at night knowing that they have completely dropped the ball on this??

What do you think will turn this tragedy around? Who will step up to the plate and take control? What Katrina has done is expose the ineptness of bureaucracy......... it's so bulky and ineffective that it boggles the mind.

I'm amazed you decided to go Check up on things there in person. Good for you! I'm also aware how slow the re-inhabitating progress has been, through following the Operation Eden blog earlier this year.
http://operationeden.blogspot.com/

I'm very curious about the levee repair status. If they'd stand up to another back-water situation from Lake Ponchetrain near the Miss.River if another storm were to head that way in this storm season.

The people stories must be abundant. Of course I wonder about all those re-locatees (refugees) all over the states n if they'll someday make it back.

safe journey to you, sam. yes, the anniversary of katrina makes this a timely article. this morning's msn main article features a newsweek article that focuses on the Mississippi people, living in those white trailers.

i can't imagine what these people are feeling. perhaps writers such as yourself and and the newsweek staffer (good company to be in-for the newsweek guy ;0) i'll be able to understand better; however, i feel the only way to truly understand is to go and see.