It is time for something new. Brand new. I would say that it is not going to be work related, but I can’t guarantee that. I might be tempted to call it an upbeat post, but I never know where these things might take me. I am going in with just one little talking point… one little insight. I wouldn’t even call it an epiphany and certainly not a revelation. Just a curiosity of our time and the passing of time – let’s see where it goes. Come on down the rabbit hole with me… 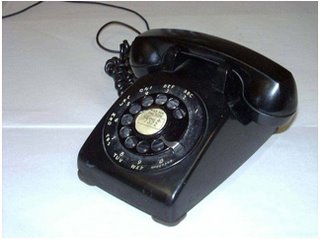 We live in an 11-digit society. Ok, ten digits. I never really understood why we had to dial that pesky “1” when calling outside the area code. Isn’t that why we dialed the area code in the first place? And it’s always a “1,” can’t they just add it on at the factory – why bother us with it? Whatever – that’s not the point. WHEW! Regroup…

Ok, we live in a ten-digit world. Area codes don’t even designate area anymore. It’s just that there are so darned many phones, faxes, cell phones, modems, dial-ups, and on and on that we need 10 digits just to direct a call across the street. It wasn’t always that way and in some places, it still isn’t. Where, you say? How about little Colfax.

Two-two-three-two. That’s my number at work, 2232. City hall is 2313. Colfax is still a four-digit town. Maybe it’s still that way where you live. Just before I moved to Truckee, it was a five-digit town. The two possible prefixes were 587 and 582. My phone number might have been 7 1234 or 2 9876. Five digits. Yes, dialing the number required all seven or sometimes ten, but the designate – the pure essence of our local identity could be represented in four or five easy-to-remember digits.

When I was young, phones had no buttons. When we “dialed” a number, there was actually a dial. I used to know how that old switching technology worked and have since forgotten, but some of the remnants of that old switching system are still with us today. For instance, when I moved from one side of Fair Oaks to the other, I could not keep my phone number. My new house was in a different “local exchange” meaning I had to get a different prefix. And I thought that prefixes were largely meaningless much the same as area codes are becoming. Whoops! That’s almost an epiphany. That was close!

Whitecliff 1 -1234 or Whitecliff 8-1234. That is where the first two numbers of the prefix of my hometown came into existence. 941 or 948, 9 for “W” and 4 for “H.” That’s right, look at the buttons on your phone. In the old days… the really old days, you would tell the operator “Whitecliff 1 1234” and she (it was always a she) would route your call at a switchboard. When the automated switching equipment came into existence, they had to change those routing areas into something a machine could understand – numbers.

Why my hometown’s exchange was referred to as “Whitecliff” is anybody’s guess. A very long time ago, there used to be a Whitecliff Market downtown – but I can’t say if it was the chicken or the egg. I do know this: There ain’t any white cliffs anywhere close. It’s interesting though. And now the opposite appears to be occurring. As more and more digits are added, the sheer number of numbers is becoming overwhelming. 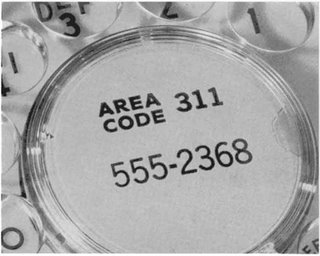 Perhaps there is hope. Not for the four-digit towns like Colfax. Like it or not, the 10-digit world has already overtaken it. The hope lies in the trend away from numeric identification altogether. True, we are just numbers and for the machines to track us it is the way it has to be, but as far as relating to each other – by phone – it’s changing. Today phones have progressed way beyond just buttons. They have screens and memory and are in all actuality mini computers with more power than the room-sized computers of yesteryear.

We scroll to a name and push a button. When the phone rings, it displays a name – sometimes even a photo of the party on the other side. I used to have at least 50 numbers stored in my head. Today? Maybe five. I don’t need to commit that memory anymore. I have an electronic device that does it for me. Several actually. Can I use that memory for something else? Dunno, but I do know that although I may be just a number, when I call someone - I’m vowels and consonants too.
Posted by Michael K. Althouse at 2:27 PM

I still remember my grandmother's phone number as FR4-8615. Just seeing the photo of that phone brought back so many memories for me. Yes, times they have a changed. I've been dating a guy for almost three years and have no idea what his phone number is, I just dial "5". If I ever get stuck without my cell phone I'd have no way to reach him. Something to think about.

Have you fallen in love with Colfax too?

hey...one of my students brought in those ol' phones...like...the kids were amazed at how phones used to be...felt kinda' nostalgic to me though...reminded me of those times I'd get up in the middle of the night to just huddle under the stairs and chat with a friend...

The place you live in...the pictures you post....wow...I just stare at them and wish I could see for myself...maybe someday soon...

Thanks for droppin' by my bloggy' space...was nice to see you there...'ave been busy and can't seem to post regularly...but you bloggy people are always in my good thoughts...

Even if I want to call my neighbor right across the street from me, I have to dial all ten digits. As a matter of fact, the state is broken up into 4 or 5 different area codes (maybe even more now)... Atlanta has 3 of them alone. You have to know the city well enough to know which areas get either 404, 770, or 678... and even those lines get blurred as people buy more cell phones and fax machines. I have one girlfriend who has 3 different area codes for her work, home and cell phone, and she lives 3 miles from her job.

When I lived in NH years ago, we were still on a party line... which I found ancient even back then. We shared the line with 3 other families, and you couldn't use your phone if somebody from another household was on the line already. That was in the 70's.

I've gotten so used to having my cell phone attached to my hip, I can't even imagine going anywhere without it now. What a difference from the old carefree days.... but at least I know I can get in touch with someone if I break down on the highway, and I like knowing I'm not all alone.

My first phone number... and I was just talking to someone the other day about how I used to know zillions of phone numbers in my head and now I don't know anyone's number. Its all in the mobile phone now.

The house my mom-in-law grew up in is now a summer place....AND it still has a dialer!! About 5 years ago, she finally switched off the party line. Since the place is only used for two months of the year, it wasn't necessary to change anything.

For some reason, I have a memory for phone numbers......if I have used it one or two times I remember it. In fact, I still remember all my parent's friends phone numbers, their old work numbers from way way back........ If my Mom is visiting from Ontario and she wants to call one of her friends, she'll just ask me to recall the number just call me "Rainwoman." Weird eh?

Think I'd rather have a talent like playing the guitar or yodelling or something that would get me an invite on Letterman.

Mike, just reading and catching up on your past posts.

Interesting this one. In Belize, we recently changed over to a 7 number telephone system. Before that, you could get anyone in Belize City by dialing 5 numbers only. Fairly easy to remember most everyone's number.

The cell phone craze has hit Central America and the Caribbean as well and all the cool people have cells connected to their hips.
The youngest of kids will walk around with the most expensive cell phones imaginable LOL

One can feel nostalgia for the good ole days when phones were kept in their proper place at home or at the office and could be left behind for a carefree day spent at the beach or elsewhere where no ringing phones could follow you.

Wow, can't believe there's still a 4-digit town!
Great piece, fun to read.
I used to like knowing what towns were which exchanges, now you really can't tell with all the expansion!
We really don't enjoy being numbers- do we?

I finally made it to another day off (here I am)...