Busy, busy, busy, busy. One more – BUSY! Did I mention I’ve been busy? Well, I have. And it just keeps getting better. This afternoon, or maybe it was late this morning – I’m not quite sure… checking the time has become a dubious luxury indeed! But I digress – Sometime today, the office of one United States congressman - the one form the forth district – called to inform our little paper that he would be in town this evening.

Guess who got the call? That’s right, your humble and intrepid reported got a brief, but very cool five minutes with republican Congressman John Doolittle. So after scrambling to get my stories just right before deadline, I had about… oh, 15 minutes to relax before heading to the VFW to cover his speech and try to get a few minutes afterward. SCORE! The upshot was another 11 hour day jam-packed with about as much learning experience as I could possibly handle. Very cool.

And Doolittle? He’s seems like a very nice guy. Almost too nice for politics, but if I have learned anything in my two score and three years plus, it’s that looks can be and often are deceiving. That doesn’t make him not a nice guy; it just means that nice guys don’t always finish last. Anyway, being that this was my first encounter with Mr. Doolittle, and since it wasn’t the forum for hardball questions… and because I had zero time to research, I did not ask about Abramoff, DeLay or any of that other nastiness. There will come a time, this was not it.

By 9 p.m., I was done. Story written, pictures attached and emailed to my editor. It was a fluff piece. Doolittle’s purpose? I believe it was simply to be visible in his district. You know, to get his name bandied about… maybe in the local paper. Don’t get me wrong, the pretense was to interact with his constituents and address their concerns, in this case veteran’s concerns. I believe that those concerns will be addressed – he was not just paying lip service. All the same, I think even that plays into his congressional popularity contest. He now has a new juice card – when they say “What have you done for me lately?” he can tell them. “Remember on August 1 up at the Colfax VFW…”

As promised I have some pictures of the Truckee skatepark and the Black Fly’s Freeride competition. It was a beautiful day in a beautiful place. Not only was the skate competition in full swing, it happen to coincide with New Belgium Brewery’s “Le Tour De Fat,” a celebration of bicycles and beer. I couldn’t imagine how the festive atmosphere of the skateboard competition could be better complimented. Music was courtesy of a band called “March Fourth.” I have never heard of them before and only caught three of their tunes, but I will be buying their CD shortly. I you want to relax, this is not the music to listen to – you WILL move to it, guaranteed.

And now, some pics. 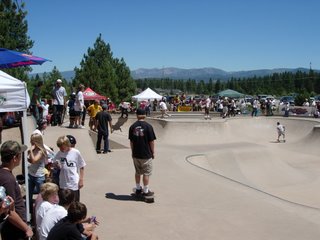 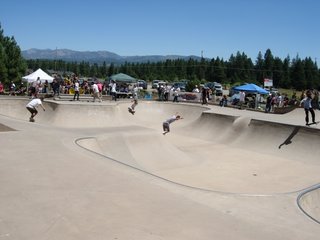 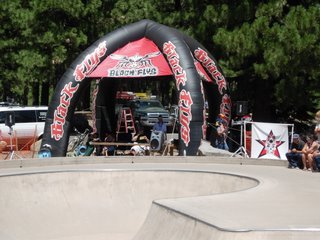 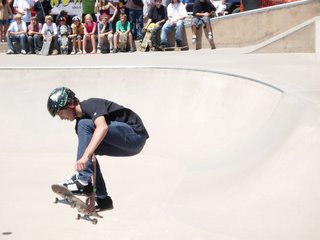 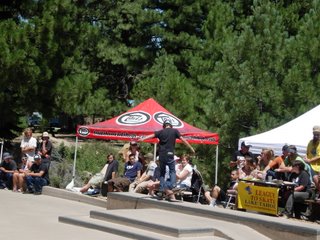 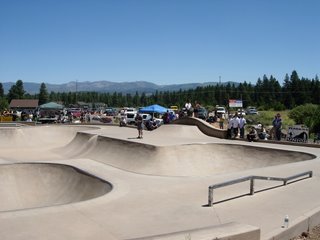 Unfortunately, I don’t have any of Le Tour De Fat, next year for sure. I do have this, however. Guess which lake this is. 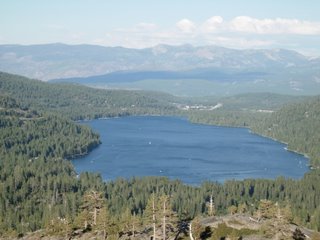 If you guessed Lake Tahoe, well… that would make you WRONG!! Haha.

This is Donner Lake, just on the eastern side of Donner Summit and one of the places the Donner Party had their famous picnic…

Thanks for taking the time to post, Mike! Sounds like things are going great - BUSY - yet good! Good job with Congressman D!

Loved the pics. too! I'll check out March Fourth, they sound like my kinda music.

so, did ya skate?

Barb ~ Yup, you're first. And number one!

March Fourth reminds me a little of the Grateful Dead combined with the "Incomparable, Leland Stanford Jr. - University... Marchin Band"

If you go to a Stanford home game, it'll make more sense.

mck ~ Not in a very, very long time. My board sports take place on softer surfaces... water and snow!

Interesting opportunities abound and it sounds like you're tackling as many as you can muster. Good on ya.

Enjoy your day.......has the heat broken? It's nasty hot in parts of Eastern Canada now, but today the humidity held off in my neck of the woods......sun, heat and wonderful breezes. I can handle that. But I have a feeling it's heading this way. Toronto and Montreal are socked right in with unlivable humidity and storms all around. In fact the power has been out in Montreal since last night. 600,000 homes affected!

Lovely park you have there... what a skateboarders delight!

I did guess Lake Tahoe, and was amused at your picnic reference about the Donner party. You are too funny!

Very nice that you happened to be in the right place at the right time for a call to come through from a VIP. It will be interesting to see the write-up you've done on him. You will post it, won't you?

Take care, and hope the heat is letting up in that part of the US a little. Still pretty oppressive here, and waiting for it to get hot enough for a night thunder/rain storm.

Congrats on the story! Sounds like you are doing great in work.

The photos are great, thanks for sharing!

Wow, you are busy! Good busy though and interesting--a little bit of everything up there. The skatepark turned out really nice..big too. Hope all goes well with that. Donner Lake...Now that brings back some good memories too! However, hmmmmm don't think I was thinking about the party's picnic at that time way back in the early 70's-Ha!

LOL, LOL...LOve your humor about The Donnor Party..I remember when we were in Truckee--that tiny little Truck Stop in 1945....There was a lot of talk about The Donner Party...and my introuduction to them.
That place sure has grown, my dear Mike!