As American as Apple Pie

Commander Mark Boettger has less than two months left to finish equipping a brand-new police department. On July 1, the city of Citrus Heights will have completed its 11 month project to provide its own police services - and there is much left to be done.

“We don’t even have uniforms yet, we are literally building the department from the ground up” Boettger said.

No uniforms, but ask him about the motorcycles the motor officers will be riding and his eyes light up - “Wanna see them?” 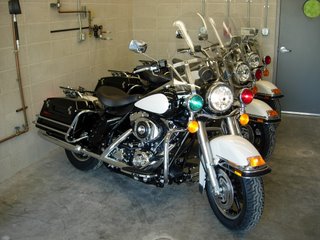 Although they will not officially be “on the streets yet,” Boettger said the city will use its annual Red, White and Blue Parade on June 24 as an opportunity to display their new officers, their new uniforms, their new patrol cars… and their bright, shiny, brand-new Harley-Davidsons.

Since incorporating in 1997, Citrus Heights has contracted its police services from the Sacramento County Sheriff’s Department.

Although the current vehicle markings and the uniforms signify the Citrus Heights Police, it is not a city police agency, but rather contracted sheriff’s deputies. That will soon change.

Boettger, a former motor officer in Menlo Park and Brisbane, knew what he wanted. “The minute your eye lands on these, you know why,” he said.

Everything at the department is new and state-of-the-art. Boettger’s excitement is readily apparent as he ticks off the items that the department either has or is in the process of getting like so many toys on a Christmas wish list.

Boettger’s primary responsibility at this stage is the procurement of the equipment the police will be using. This includes the facility, the vehicles, and the electronics such as computers and radios.

Although he must answer to Police Chief Chris Boyd and City Manager Henry Tingle, the facility and equipment decisions are initially his, while the chief is concentrating primarily on staffing.

On the way to view the three new motorcycles already at the police station, the commander stopped to show off the new police cruisers, one of which has been outfitted with the new logo and the state-of-the-art electronics. 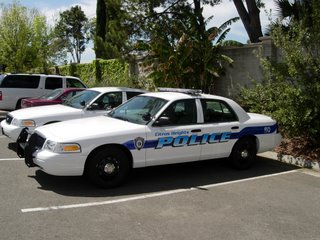 A Ford Crown Victoria Police Interceptor. Nice – but every law enforcement agency in the county uses them. It’s the de facto police cruiser of the day.

There is construction everywhere. When the commander said that this department was being built from the ground up, he meant it quite literally.

Finally arriving at a small roll-up door towards the back of the building, the commander asks, “Are you ready to see what’s behind this door?” smiling a kind of knowing smile.

Inside were three brand-new Harley-Davidson Road King police motorcycles. These are the first three of the total of 10 bikes the department will receive. They are arriving daily from Rocklin Harley-Davidson.

Commander Boettger approaches the first in line, turns on the lights and smiles. “Want me to turn on the others?”

Boettger flatly denies that he is just a little more passionate about the motorcycles than the police cruisers or the other equipment. He says that he is equally excited and as passionate with the cars as he is with the bikes.

He then approaches that same first bike and wipes a little grease off the chrome, reconsiders his answer and says, “Well, I guess I wasn’t wiping smudges off the Crown Vic.”

The bikes are not yet equipped with decals, radios, radar or sirens. A separate vendor will install those items, but the appearance, according to Boettger, will remain “clean, without a lot of gear hanging off.”

“We got them equipped with a windshield,” he said. “We want to be as visible as possible.”

Boettger starts one of the motorcycles. The signature sound so unique that Harley-Davidson attempted to copyright it dominates all within earshot. He shuts it off and smiles, “That’s why.”

“As they’re coming to us down the freeway, down the back streets, down the city streets, kids are pointing out the windows, cars are slowing down to look at the trailer because they’re looking at these motorcycles. That’s what I experienced as a rider myself, that’s what we’re experiencing here, before they’re even outfitted,” Boettger said.

Harley-Davidson delivered its first police model to the Detroit Police Department in 1908. More than 3,000 police departments were using Harleys by the late 1920s. After dropping to only about 400 law-enforcement agencies by1983, there are currently more than 3,000 agencies once again using Harleys.

Harley-Davidson’s loss of market share was due to a number of factors including quality concerns and foreign competition first from Kawasaki and more recently from BMW.

As the price tags at any Harley-Davidson dealership will confirm, these bikes are not cheap. Elk Grove Police Chief Bob Simmons’ recommendation to the Elk Grove City Council cited a base price of $22,345 for each of their 11 Road Kings.

The police equipment (radio, radar, etc.) that must be added to each machine costs an additional $11,330.

In his analysis, Simmons found that the maintenance cost of the Harley-Davidsons is three cents per mile less than the BMW and the resale value is substantially better.

For Citrus Heights it’s as much about identity as anything else. When their contract with the Sacramento County Sheriff’s Department comes to an end, the “Citrus Heights Police,” a component of the sheriff’s department, will come to an end.

It will be replaced by the Citrus Heights Police Department. The CHPD is a fully staffed, funded and controlled component of the city of Citrus Heights.

A city’s identity is represented, in large part, by their police department and its image. The Road Kind personifies that image.

The bikes are an awesome sight - black, white, chrome and big. Weighing in at over 750 pounds with engines displacing 88 cubic inches, this machine dwarfs the BMW.

The Harley comes with an attitude, an image and prestige that are not available at any price from the other manufacturers and that is what Boettger was after for his motor officers.

“It’s more than just traffic duty,” Boettger explains. The motorcycles represent the city; they are meant to be seen and heard. They won’t be found hiding behind billboards and trees, but out in the open, on the road everyday.

There is a slogan that applies to Harley-Davidson riders and the machines they love that goes like this: “If I have to explain, you wouldn’t understand.”

Perhaps, but one doesn’t have to ride a Harley to experience the mystique that only a Harley-Davidson can deliver.

Commander Boettger asks whether this would be a story if the city had decided on BMWs or Kawasakis. “What about the new Honda police motorcycles,” he asked.

These are rhetorical questions; he knows the answer. It wouldn’t be news. In the motorcycle world, there are Harleys and then there is everything else.


Michael Althouse is a freelance writer and journalism major at California State University, Sacramento. He can be reached at malthous@mac.com.
 2006 M.K. Althouse
Posted by Michael K. Althouse at 9:57 AM

i can tell you had fun with those interviews :)

there's a motorcycle cop that hides in various spots on imp highway. it's become a bit of a "where's waldo" game for me to spy where he's hiding each morning on my way to work. i'd hate his job. that really seems to be all he does: hide, jump out and give tickets. i hope i never meet him!

glad to know that the cops in citrus heights will have cool bikes. i like it when the public looks at cops w/ a bit of awe and respect.

Great feature story! Given the fact that you like motorcycles, I'm sure you enjoyed doing this one! Was it published anywhere? :)

Get down with your bad self, Mike! Great artiucle. I guess all the other cops in the area are going to have "bike envy" when they see those Harley's cruising by!

It shows that you were enthusiastic and interested in this story. I liked the interview very much.
Job well done, Mike.

Michael, Great job on the article. You can feel the pride (and rightly so) that Commander Boettger has.

You are right, one doesn't have to ride a Harley to experience the mystique. I ride a Yamaha and enjoy the mystique every time I get on it. I feel the adventure, thrill, and excitement every time I travel somewhere on my motorcycle. It's a lot more fun then in a car, truck or van. That goes for every make and model of motorcycle. We all have our favorites and that's cool.

Mike, Mike, Mike, I have to say that the article is a very interesting one. Especially the way that you present it with facts of days gone by.

Not that I'm an expert, though I did write for GC until it's demise in January of this year, but your style has a way of grabbing the attention of the reader.
Keep it up because your on your way.

Really like reading this one. Just confirms the fact we as riders of motorcycles should be heard. The judicial bike is might pretty too! Great article!!
KT

im intimidated by guys who can ride bikes esp. cruisers. seems all too macho somehow. u howevr seem more santa-claus than heavy metal guitarist from the wild side who cn steal my chicks, so nice site man. n i mean that in the nicest way.

You know, I read here that the Ford cars would soon be replaced by Dodge Chargers.