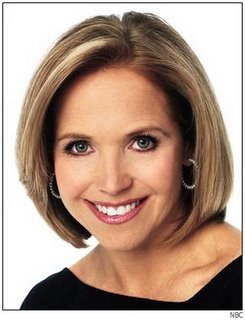 It would appear that the Today Show, NBC’s venerable morning news program has reached the end of an era. The 15-year reign of the presiding morning news show queen, Katie Couric, has come to a close. This is no longer news – the headlines have long since passed. The buzz, the speculation, the breaking news and ultimately the official announcement of the changing of the guard culminated in today’s (or Today’s) obligatory farewell show. Although not an extravaganza of unprecedented proportions… indeed, the stops were not all pulled out, it was a fitting farewell to the perpetually cute and perky Couric.

There is little question as to Couric’s domination of the morning news-show female co-host position. Many would argue that she was instrumental in defining, or at least evolving the role. Whatever personal perception one may have of Couric, it is impossible to ignore the length and breadth of the experience she has acquired during her tenure at the Today Show. How will that experience serve her in her future endeavors at CBS News? Only time will tell.

The next step in her career goes well beyond the hype. She is breaking new ground. She is going where no woman has gone before. Amazing as it seams, 2006 marks the first time a woman will have her own solo weekday anchor chair of a major network news program. That... is news. Indeed, her first lead story very well may be about one Katie Couric smashing through the glass ceiling – entering the heretofore hallowed ground of the network news anchor.

Imagine the irony - Katie reporting on herself, “Good evening and welcome to the CBS Evening News. I’m Katie, ahem, Katherine Couric. Our lead story tonight…” Ok, granted - unless it is an exceedingly slow news day, the “Katie” story would probably not lead. The fact still remains that when she takes that anchor desk, it will be news. Even if she does not do the story herself (likely) someone else will and it will be echoed across all major and minor news outlets alike. The novelty, the pressure, the questioning of her qualifications and her persona as well her ability to “fill some very big shoes” will all be reported, speculated and commented on. Does she have what it takes?

It is always newsworthy when a major network news anchor position changes over. Although perhaps journalists first, at this level they are celebrity in equal measure. Indeed names like Walter Cronkite, David Brinkley, Tom Brokaw, John Chancellor and Peter Jennings are ubiquitous. There have been some women allowed temporary or peripheral membership into this fraternity as well. Connie Chung, Barbara Walters, Diane Sawyer and Elizabeth Vargas are perhaps the most notable. They failed, however, to meet the one requirement that would guarantee lifetime membership: a solo weekday anchor chair.

Couric’s bubbly persona, her perkiness and innocent charm hide a fierce determination and courage that cannot be underestimated. The time for this “equality” is well past, yet the scrutiny that will be leveled against her will be like none before. Every blink of her eye, tilt of her head… her attire, her makeup and a million other details will be analyzed to the nth degree. To some she will be able to do nothing right and for others she will do no wrong. It takes guts to enter this lion’s den. The risks are not insignificant and they are hers alone to bear. The rewards, however, will be shared by all women and as a consequence, all mankind.

It is inevitable that one day, women and men, blacks and whites, gays and straights and all religions (or lack thereof) will be on equal footing. Equal rights, not just in law, but in perception are progressing slowly. There are, however, pivotal moments in which punctuated, rapid change occurs. Katie Couric’s ascension represents one of those moments. Give CBS and Couric credit – this is more than just a business decision.
Posted by Michael K. Althouse at 12:38 PM

I watched a bit of this show this morning, while getting ready for work.

Not being much of a Couric fan, it had no real impact upon me. Frankly, I love Charlie Gibson (whom I hear is also moving to the evening on ABC.)

One thing we know for certain: everything changes, even us!

Good for her! She's been through alot in her life and I think she deserves some applause! She's proof that sticking with something and working hard can ACTUALLY get you somewhere.

I heard that her new, future co-workers are not excited about her arrival.
Any 'real' news on that?

I think you make a good point here. Believe it or not, I have never really seen her on TV because I don't watch much of it...maybe an hour a week.

Mike, you can take just about any topic or event and turn it into something interesting and worthy of contemplation. Love that about your writing.

Definitely a mark in history!

I'm afraid I don't know Katie Couric and never watched her show, but I do wish her the best. Because of the press, I was aware she was changing positions to a more important position. It sounds like she will do well and after a while they will forget she's new and quit nit-picking her. Great write-up on her.

I was always neutral on her at best. I was never particularly impressed and felt that much of the talk about her was contrived hype. Others have left stronger impressions with me. My fave anchorwoman is Erica Hill, long may she reign.

OOPS, my bad. I meant Robin Meade, who is known for her quick wit.

bfc ~ I'm not much of a Couric fan either. I don't thinks she is of the caliber of many other women in her line of work. However, due to fate or otherwise, she is the one to cross this barrier. It's a big deal.

Jen ~ She has been through a lot. Whatever else is said, she is a trooper.

sadie ~ I wouldn't be a bit surprise if there were a bruised ego or two and some toes stepped on along the way. News? Nothing substantiated - they'll never let on.

barb ~ Well thank you! I'm not real big on TV generally, but this is news.

Lee Ann ~ And about time!

bb ~ Thank you 2. There were many factors involved - and it was a long time coming.

saur ~ I absolutely agree that there is far more talent in the pool than Ms. Couric posseses. However, she is the chosen one. Although it is true that the big three networks don't mean as much as they once did, it is still a major paradigm shift that a woman has finally been given the weekday anchor position. Are there better qualified candidates? Sure, but ratings are king, and Couric will bring that to the table, at least in the short term.

BTW: Although I don't know much at all about her, I saw Solidad O'Brien interview Michael Brown just after Katrina hit. Wow. She was tough. I know good ole Browny isn't much of an adversary, but O'Brien tore him a new one. Very impressive.

funny, I didnt even think of it in these terms. You are correct (in my humble opinion at least!)