We're Not Going to Take It!

I just finished polishing up a new post that was not my work at all. Yes, credit was given and I did dress it up with the layout, a picture of the writer, etc., but I did not write the lyrics of the song I posted. It’s a rather dark song about the nature of the human race. Although there is a great deal of profound and prophetic truth in it, I took it down after I read it two or three times - it doesn’t represent how I feel. Not right now anyway. I am far more optimistic and grateful… dare I say, even hopeful, than the post would allude. I did, however, post it on Overflow for those that wish to read it; the words still hold a great deal of relevance. 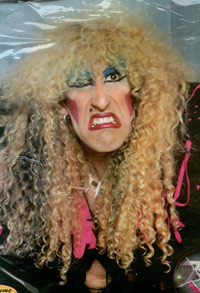 I have had a feeling of stagnation for the last several days. I wouldn’t necessarily call it boredom, nor would it be accurate to define this sensation as complacency. It’s unusual in that I don’t have anything that is pressing to be done; yet there are things to do. I haven’t been reading the paper or keeping up on the news (much) for two or three days. Perhaps I just needed a break. I know that in a week school will start for the summer session and I will be starting a journalism internship that will not only keep me busy, but quite likely provide me with the most effective motivation possible – a deadline!

So here I am, sitting at my very messy desk, popping the keys on my iBook at 2:50 a.m. I was sound asleep (or so I thought) on the sofa two hours ago – not a care in the world. Ok, that is patently false. I care about an awful lot ranging from the personal (the welfare of my children and their futures) to the global (environmental, societal, and political) and virtually everything in between, not the least of which is the sorry state of my office. Apparently I care about one or more of those things right now, when I should be sleeping.

My perception about writing is that one must answer the call whenever that may be. One of the attractions I have to this profession is the freedom it offers. That freedom, however, comes with a responsibility to indulge the process either when required such as with an assignment or deadline, or when compelled, like now. In all honesty, I was hoping the urge was just to publish something, to put up something new but not necessarily original. Ah, the best laid plans…

I have grave concerns about where the world is heading and perhaps even graver concerns about the direction of this nation. I still consider the United States the greatest nation in history, but I’m afraid it has lost much of its luster in recent years. Some of that is due to circumstance, some due to poor leadership and some is due to arrogance. Unlike so many others, however, I have not lost hope that this nation and the world can re-group and work together. Indeed, I don’t have a feeling of dread or impending doom at all, quite the contrary.

I know that world affairs aren’t looking too good - and for good reason. This is not even close to the first time the world has entered a tumultuous period. In fact, in modern history, the periods are getting shorter, albeit possibly more frequent. Indeed, the differences don’t stop there – one could point to the level of consequence in terms of the environmental, the humanitarian, the prejudicial, or the polarized as being much more extreme - even unparalleled. The presumption is that maybe this time it has gone too far, that this one can’t be pulled back. It’s almost as if the bomb has already been dropped, the trigger has been pulled and there is nothing that can be done.

The following is a comment I posted on Cyberkitten’s blog in regards to a post about Orwellian predictions and the current state of affairs. Part of this same line of reasoning also appeared in a comment I posted on Saur Kraut’s (Saurly Yours) and Michelle’s (Sweet N’ Sour) blog regarding local governmental issues.

I've said this before and I still believe it. This machine that is this country - political, economic, social, etc., exists at the will of the people. It is about as inefficient as one could conceive a system of government to be. It is also so big and complex and multi-faceted that no one person or even a coalition of like-minded egocentric ideologues can bring it down.

The American people are slow to anger and reluctant to rise up, but once riled, there will be no placation. We are approaching critical mass. The mid-term election will be interesting. The First Amendment's guarantees are being more frequently and (pardon the term) liberally applied everyday. The press is coming out of hibernation... people are starting to get interested again. 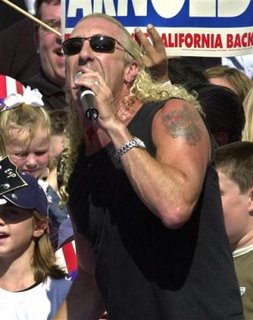 And we're pissed. We don't want to deal with this crap. We want a responsible, capable and ethical group of representatives to deal with the business of government so that we can attend to our lives. Right now, we have to handle our own affairs while simultaneously keeping a close watch on what our "leaders" are doing. That is because they are not doing the job they have been hired for. They are not working for us.

Change is in the wind. If a few good Democrats can't figure this thing out with the help of a few good Republicans then they’ll all be shown the door. It's happened before and rest assured it will happen again. These bozos are confusing complacency with stupidity, quiet with acquiescence and apathy with approval. Americans are tolerant to a fault, but once riled, we will be on you like white on rice - just ask our commander in chief how that's working for him. And the rude awakening is coming; it is going to show where the power still rests. That a "government of the people, by the people and for the people shall not perish from the Earth," -Abraham Lincoln

Although slightly edited from the original, this represents a certain brand of defiant optimism that asserts itself when things start to get sideways. Indeed, it is this spirit of defiance in the face of authority that gives this nation its character. I feel the same can be found in all the peoples of the world – true power ultimately has to reside with the people – they just may not believe it yet. It’s an attitude that sends the warning that at some point, we’re just not going to take it anymore. The last straw is close at hand.
Posted by Michael K. Althouse at 4:08 AM

One person's stagnation is another's growth.

One never knows where one is going nor heading...

I know that feeling of always having to say something or do something...Just being can open up doors for us!

Have a great day.

here's how everyone can be that 'white on rice' you mentioned:

people need to be actively emailing ALL the reps in the House of Representatives, especially over the impending doom of reforming our immigration laws...what people are refusing to call amnesty, but it is just that. This will cripple our nation if this passes.

what chaps my hide is that the senate KNEW it was a flawed bill and yet they passed it anyway, lamely saying that passing anything was better than passing nothing so their constituents would see they've been productive. Y!!! i'd rather they did the hokey pokey than pass that piece of trash.

okay, calm down, mck. sheesh, i'm ranting all over your blog, mikey. here, i'll get a moist towelette and clean up. sorry.

ya got me all revved up, mikey.

You have the makings of a great hack, Mike, as your thoughts and ponderings keep you up at night - this is a *good* thing. thank you for your thoughtful comments on my blog today. if you connect with my words it makes me wonder if perhaps there is a part of you that would relish wandering into prose - i'm always very interested to read your opinions/ thoughts, and would love to read your words shaped into different forms too.

my blog tends to come straight from the heart, and this complements the work i'm doing right now (the book). the journalism has taken a back seat for me, and to be honest i'm relieved. Six years was long enough and now i'm enjoying a new form of expression, even if at times it is excruciating for me ( a point i probably labour too much in my postings :-)
Sx

Your thoughts are reeling through your head.
What better way to express them than through writing. You have a true gift of a writing talent.

I hope you have a great week!

Brilliant, and so true! The peoples voice will come to stand up, but lets hope that more people remember the power of voting, and that it's a duty as a citizen.
I was saddened to hear that more people had voted for the new "American Idol" than in any Presidential election.... what does that tell us?

I also traveled over to Cyberkittens blog, and was equally impressed with her post (as well as her blog). Thanks for sending me that way.... I've added her to my favorites list.

Dee Snider and no coffee in me. Ouch.

This is a great comment Mike...I agree with you and I too hope that we are reaching "critical mass"...where people stand up and shout, (as in "Network" by Paddy Cheyefsky..) "I'm mad as hell and I'm not going to take it anymore!"...
I hope this happens, and very very soon...Change is in the wind, for sure!